Difference between revisions of "The player"

The player of Mine Blocks is also known as Frank, and is the alleged protagonist of the Mine Blocks.

The player has the same height and size as a zombie. The player can jump about 2 blocks high, although a higher jump can be achieved by jumping on a bed or a Slime block. The player can also swim, climb ladders, attack mobs, enter portals, ride entities (pigs and rafts), and affect other things within the game. The player can also run by pressing the "D" button or the "Right button" twice, quickly.

In survival mode, most hostile mobs are, by default, in pursuit of the player.

The world is only active in a 30x30 box around the player. However, this is neither centered on the player, nor aligned to a fixed grid, so it is necessary to test for every player position you might want to use this for. The most extreme above:below or left:right inequality found so far is 18:11.

The skin is the graphics that the player appears as. The default skin is often compared to a pirate, or more jokingly, as a hobo. Beneath the blue jacket is just skin.

The skin is now customizable as of 1.26, to any uploaded and publicized skins or you can upload one. 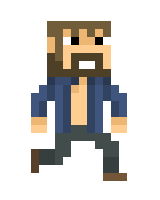 The player in his running position.