From Mine Blocks Wiki
Revision as of 02:00, 15 October 2019 by Minelol5 (talk | contribs) (revamped the page)
(diff) ← Older revision | Latest revision (diff) | Newer revision → (diff)
Jump to navigation Jump to search
If you find a typo, inconsistency, or error, please sign up and help out the wiki! We can't do it without your help! :D Thank you!

In general, Mine Blocks Redstone circuits are assumed to behave like 2 dimensional Minecraft circuits, and Minecraft guides are applicable where this wiki is deficient.

Major Differences Between Minecraft and Mine Blocks

There are way fewer Redstone components in Mine Blocks compared to those in Minecraft.

The block updating order and internal states are not described here but it can have unexpected and temporary side-effects. It is easy to create "phantom" power in ways other than shown above. An off-switch attached to such positions then removed is a reliable remedy unless there is an active source causing it. It is also common for tiles that should be powered to remain inactive, or be made inactive by touching unpowered dust for example. The remedy is to force the update to work differently either by resetting power or partial rebuilding.

A Redstone torch placed on the side of a block does NOT power the block below it as in Minecraft. To get downward signals in Mine Blocks without moving parts, you can use the following arrangement.

In Mine Blocks, there's no such thing as "Redstone ticks", everything happens all at once, which is painful for timing

A list of all the Redstone components and their intended functions

These components are used as a way for the player to interact with the Redstone contraption.

These components are mainly used to turn the inputs into outputs.

These components are usually the end result of a Redstone contraption.

This is to be used if you have a hard time understanding the complex technical aspects of the next section.

When a piece of Redstone dust is powered, it has a full signal, if you carry on that signal by adding another Redstone dust onto the end, it will have a weaker signal, it keeps going like this until 16 blocks out, where the signal will have run out. Unlike Minecraft, Redstone dust does not power blocks 2 blocks below the dust, it has to be directly on top in order to be powered.

Redstone torches will power all sides except for below the torch, and if it's placed on a wall, the block behind it.

Top-mounted inputs won't power blocks 2 blocks below like in Minecraft, but it can still power the sides

Side-mounted inputs can power below the input, and it can power both sides as well, but not above

This is used for a more technical understanding of the game's redstone mechanics. 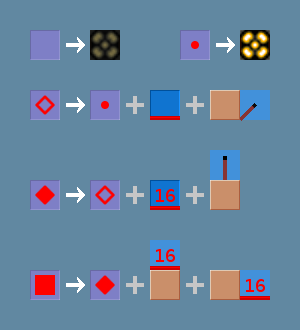 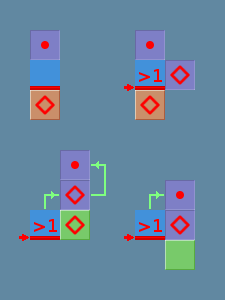 The green blocks act as relays when present, causing the target tile states to be updated according to the dust state, otherwise, they stay at their last state. The left version overrides the right. 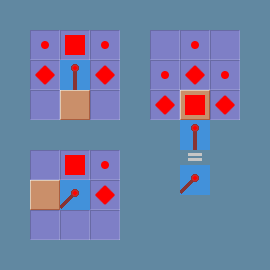 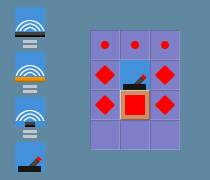 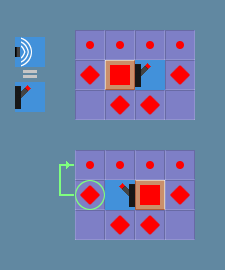 The circled tile remains charged after power is removed, and activates the tile above it, unless explicitly depowered by other means.

The above scheme is simplified for practical use, but there are configurations that it can't describe.