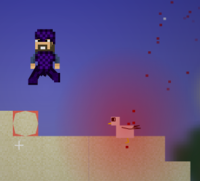 Flaming chickens are chickens set on fire with flint and steel, anything that's flammable can be set on fire if the flaming chicken gets too close to it, they also lay fire eggs, and they also make thunder storm sounds, they can drop charcoal and sometimes cooked chicken if killed.

Once a chicken is set on fire, flaming chickens bounce around continuously and repeatedly bark. They also glow red. They will leave a trail of fire, and can be very dangerous when in wooden areas or forests.

FYI: They will not die from their own fire